This blog is no longer active or being updated. 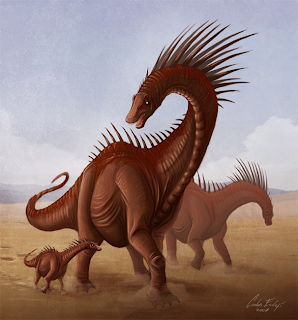 Amargasaurus (ah-mar-guh-saur-us) is an unusual sauropod in that it has two rows of spikes along its neck to its tail. Amargasaurus was small for a sauropod only being about 10 meters (33 feet) in length. Like any sauropod the Amargasaurus was a plant eater that ate mostly ferns and conifers, but it couldn't chew so the dinosaur would have swallowed gizzard stones to help break up the plant material in the stomach. 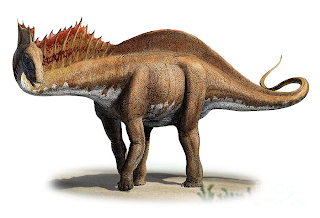 What made Amargasaurus so unique was that it had a short neck and had a double row of large spines along its neck and back. It was once thought that Amargasaurus supported a sail on its spines but this was soon rejected because it would not only restrict movement but their were no scares on the bone where tissue would have been attached. It is now thought that the spines may have had a horn-like covering and may have been used for defense especially when the dinosaur was young, but it may have also been a communication devise or a mating attraction by clattering the spines together to make noise. 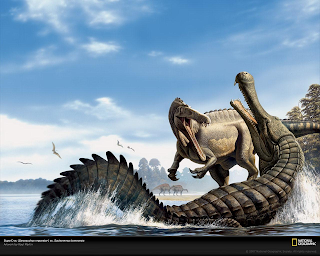 Sarcosuchus (saur-co-sue-cus) or SuperCroc was one of the largest crocodilians that has ever lived the biggest known is estimated to have been 38.2 ft long (bigger then the famous Deinosuchus). The skull alone is as long as a full grown man. Sarcosuchus also lived during the dinosaurs and is thought that it may have preyed on some dinosaurs that lived during that time. 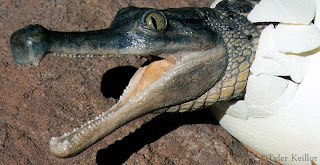 Sarcosuchus's diet is highly debatable due to it having a long narrow snout but when Sarcosuchus was a juvenile its snout was narrower, longer, and weaker then the adult counter part. It is thought that juvenile Sarcosuchus's ate mostly fish during that time but as they grew older their snout widen and thickened making it possible to hunt larger and larger prey. It is thought that Sarcosuchus's main prey was fish but when an adult they needed to hunt much larger prey like dinosaurs to sustain their large size.

Please report any missing pictures or video you come across. Just leave a comment at the bottom of the page you are on.
Thank you.